We just recently noticed that our blog posts were hidden from our family and friends so we apologize for the inconvenience. We aren’t the most tech savvy individuals aha but be prepared for a flood of blog posts coming your way!!!

As you know the past couple of days have been surrounded around CTS week. Throughout the week we have been running a number of different activities for the high-school students who didn’t go on the land trip. This past week has been super hectic and pretty physically demanding with the number of different sports that we had played. Here’s a break-down of what our week looked like.

Monday – We focused heavily on introductions and icebreaker games. Our favourite part of that day was when we gave the students a toilet paper roll and asked them to take as many pieces as they liked. Those were the only instructions that we gave them. The students thought this was pretty funny and of course took super long pieces. Afterwards we told them to count how many they had taken. On average kids had 10-20 pieces, so then we told them that however many pieces that they had was the number of fun facts that they would be sharing with us.

The theme of our CTS week was similar to the television show survivor. We separated the kids up into two different teams (the ravens VS the polar bears) where they would compete in various mini challenges. The most entertaining challenge to watch was when we gave each team a mat and told them they were surrounded around lava and the only way to get to the other side of the gym was by using the mat. The catch however was that they couldn’t have any part of their body touching the ground. This was a really good team building/ cooperative game because it allowed the students to come up with their own strategy in getting to the other side through trial and error.

Afterschool I headed to Job Club at the library where we discussed the importance of respect with some of the students which was led by Aileen. Job club is such a vital afterschool program as it allows the students to express their ideas and thoughts in a very positive and comfortable setting. It is a club that truly challenges the students and allows them to see other perspectives and the many opportunities that are out there for them. Aileen has been working with the group of students for the past year and as a result has developed a wonderful program and such an open environment. Jill and I are fortunate enough to be able to participate in these discussions as we always find ourselves leaving having learned something new.

Tuesday- Was our sports day we started the day off with a good old game of Canadian hockey. The students were super into the game and Jill even played as goalie, (rocking out all of the equipment) here check her out

Wednesday – We started in the gym with a game of volley-ball. This was our workout segment of survivor. Separated into their teams of Ravens and Polar bears we had an intensive workout planned for students.

Since the students were broken up into teams of 7-12 they had to divide the workout between them all and as a team finish each goal.

After our gym period we headed to the classroom where we briefly did a lesson on alcohol. Afterwards each student had the opportunity to try on the drunk goggles which allowed them experience what it feels like being drunk. As an activity we put coins on the ground and had them attempt to pick them up while wearing the goggles.

Later on we had gotten the students to make little paper envelopes where they could write nice and positive comments to one another. We call these warm and fuzzies, the students were super excited and eager to read what was inside their envelopes.

Thursday- Was our photo scavenger hunt among the teams. This was a lot of fun as it got the students out of the classroom setting and again focused on team work among them. We gave the students a time limit of hour to complete 20 picture/video challenges. Some of our favourite challenges were getting the students to rap lose yourself, a video of a basketball trick, making a snowman, trailer of fast and furious 7 and of course a human pyramid.

Afterschool we ran sports and we had a great turnout of students who came out. The activities are always our favourite part of the day as it allows us to interact with the students on a more competitive level and see a different side of them. 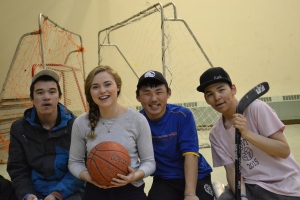 Perhaps the most exciting part of our day, was later on when we had the opportunity to teach a lesson on sexually transmitted infections to those who were 16 and up. This was a huge deal for us and to the northern project as a whole as it has allowed us to expand more within the community instead of being seen strictly in a school setting. Those who attended expressed that they felt more comfortable in the library setting and as a result we had some great group discussions started. For our next session in the library we plan on discussing healthy relationships. We are so thankful to have gotten this program started and are extremely grateful for all of Aileen’s help.

In preparation of cultural day tomorrow we headed to the candy man (Jim) in order to pick up some treats for tomorrows winning team. While there we had asked the man how he ended up in Pond Inlet. From that one question we ended up talking about a broad range of topics from health, politics, the government, the war, the great depression, education and Jim’s life. Before we knew it an hour had passed by and a line had formed out the door and we still hadn’t gotten any candy!!! It was a funny way to end the night and left us feeling like we were best friends with Jim or as the kids call him the candy man. 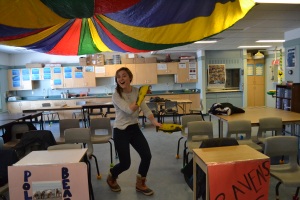 To begin we started the day off with some skiing in the back of the school. Excited to be skiing for the first time in Nunavut, we found ourselves on the ground more than having skied. I got a nice action shot of Jills mid wipe out in the snow ahah. We tried to get a game of capture the flag set up while skiing however we found that to be more challenging than expected so that lasted about 5 minutes aha.

We then headed inside for our cultural/ talent show segment of the day 3 of our students John, Savannah and Steven had performed a song for the class while playing the drums. It was an amazing performance and truly well done for the time that they had to prepare. Afterwards Nigel had set up his video game to show us how he defeated a certain level in the game. Finally we ended the show off with a song/rap that the students really seemed to like. Although a lot of the students didn’t end up participating they were super supportive of one another.

In order to decide the winner of CTS week we had a grand finale of jeopardy surrounding the topic of alcohol. It was a close game however the Polar Bears ended up winning the game. We gave them each a medal and a bowl filled with nutritionist… yet delicious goodies supplied by the candy man himself.

To end the day off on another positive note we finally opened up our warm and fuzzies. The students were super eager to read them and as a result quickly ran up to grab their envelopes. After reading them the mood of the classroom uplifted to another level and put a smile on most of the students faces.

Overall CTS week was a huge success and allowed us to build stronger relationships with some of the students in grade 10,11 and 12 leaving us even more excited to be teaching them in the following weeks to come!